Sign Of The Prophet Jonah: "The men of Nineveh---repented at the preaching of Jonah; and, behold, a greater than Jonah is here. Matt. 12:41 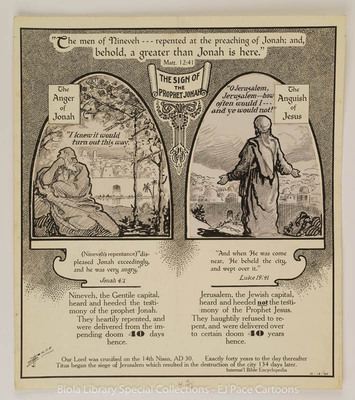 The Anger of Jonah; "I knew it would turn out this way."; (Nineveh's repentance)"displeased Jonah exceedingly, and he was very angry."-Jonah 4:1; Nineveh, the Gentile capital, heard and heeded the testimony of the prophet Jonah. They heartily repented, and were delivered from the impending doom 40 days hence.; The Anguish of Jesus; "O Jerusalem, Jerusalem---how often would I---and ye would not!"; "And when He was come near, He beheld the city, and wept over it."-Luke 19:41; Jerusalem, the Jewish capital, heard and heeded not the testimony of the Prophet Jesus. They haughtily refused to repent, and were delivered over to certain doom 40 years hence.; Our Lord was crucified on the 14th Nisan, AD 30. Exactly forty years to the day thereafter Titus began the siege of Jerusalem which resulted in the destruction of the city 134 days later.-Internat'l Bible Encyclopedia