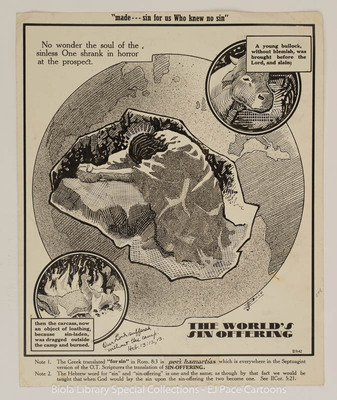 29 x 24 cm., Pen and Ink on Cardstock. Illustration of the earth. Three other illustrations on the card. One with Jesus praying . Second the head of a cow. Third is the carcass of the cow being being burned.

"made---sin for us Who knew no sin"; No wonder the soul of sinless One shrank in horror at the prospect.; A young bullock, without blemish, was brought before the Lord, and slain; then the carcass, now an object of loathing, because sin-laden, was dragged outside the camp and burned.; Our Lord suffered without the camp.-Heb. 13:12,13; Note 1: The Greek translated "for sin" in Rom. 8:3 is peri hamaritias which is everywhere in the Septuagint version of the O.T. Scriptures the translation of SIN-OFFERING.; Note 2: The Hebrew word for "sin" and "sin-offering" is one and the same; as though by that fact we would be taught that when God would lay the sin upon the sin-offering the two become one. See II Cor. 5:21