Poor fellow! He has been 'gassed' by the Germans 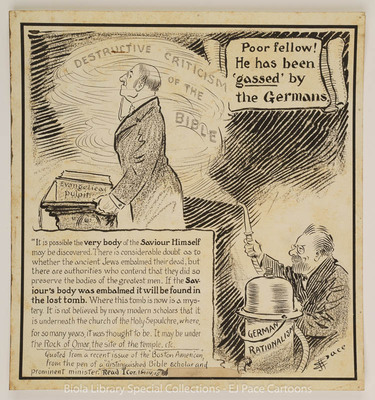 24.5 x 23 cm, Pen, Ink, and Charcoal on Paper. Illustration of a man spraying gas on a minister from behind.

"It is possible the very body of the Saviour Himself may be discovered. There is considerable doubt as to whether the ancient Jews embalmed their dead, but there are authorities who contend that they did so preserve the bodies of the greatest men. If the Savior's body was embalmed it will be found in the lost tomb. Where this tomb is now is a mystery. It is not believed by many modern scholars that it is underneath the church of the Holy Sepulcher, where, for so many years, it was thought to be. It may be under the Rock of Omar, the site of the temple. etc."-Quoted from a recent issue of the "Boston American", from the pen of a "distinguished Bible scholar and prominent minister."; Read I Cor. 15:14,14.; Destructive Criticism of the Bible; Evangelical pulpit; German Rationalism.