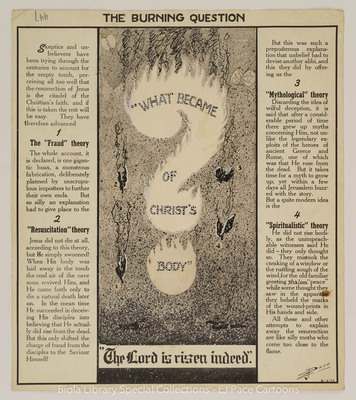 31 x 27 cm., Pen and Ink on Cardstock. Illustration of a burning question mark. Has text written on it.

"The Lord is risen indeed."; Skeptics and unbelievers have been trying through the centuries to account for the empty tomb, perceiving all too well that the resurrection of Jesus is the citadel of the Christian's faith, and if this is taken the rest will be easy. They have therefore advanced.; 1-The "Fraud" theory: The whole account, it is declared, is one gigantic hoax, a monstrous fabrication, deliberately planned by unscrupulous imposters to further their own ends. But so silly an explanation had to give place to the; 2-"Resuscitation" theory: Jesus did not die at all according to this theory, but He simply swooned! When His body was laid away in the tomb the cool air of the cave soon revived Him, and He came forth only to die a natural death later on. In the mean time He succeeded in deceiving His disciples into believing that He actually did rise from the dead. But this only shifted the charge of fraud from the disciples to the Savior Himself! But this was such a preposterous explanation that unbelief had to devise another alibi, and this they did by offering us the; 3-"Mythological" theory: Discarding the idea of wilful deception, it is said that after a considerable period of time there grew up myths concerning Him, not unlike the legendary exploits of the heroes of ancient Greece and Rome, one of which was that He rose from the dead. But it takes time for a myth to grow up; yet within a few days all Jerusalem buzzed with the story. But a quite modern idea is the; 4-"Spiritualistic" theory: He did not rise bodily, as the unimpeachable witnesses said He did--they only thought so. They mistook the creaking of a window or the rustling sough of the wind, for the old familiar greeting shalom "peace" while some thought they saw in the apparition they beheld the marks of the wound-prints in His hands and side. All these and other attempts to explain away the resurrection are like silly moths who come too close to the flame.